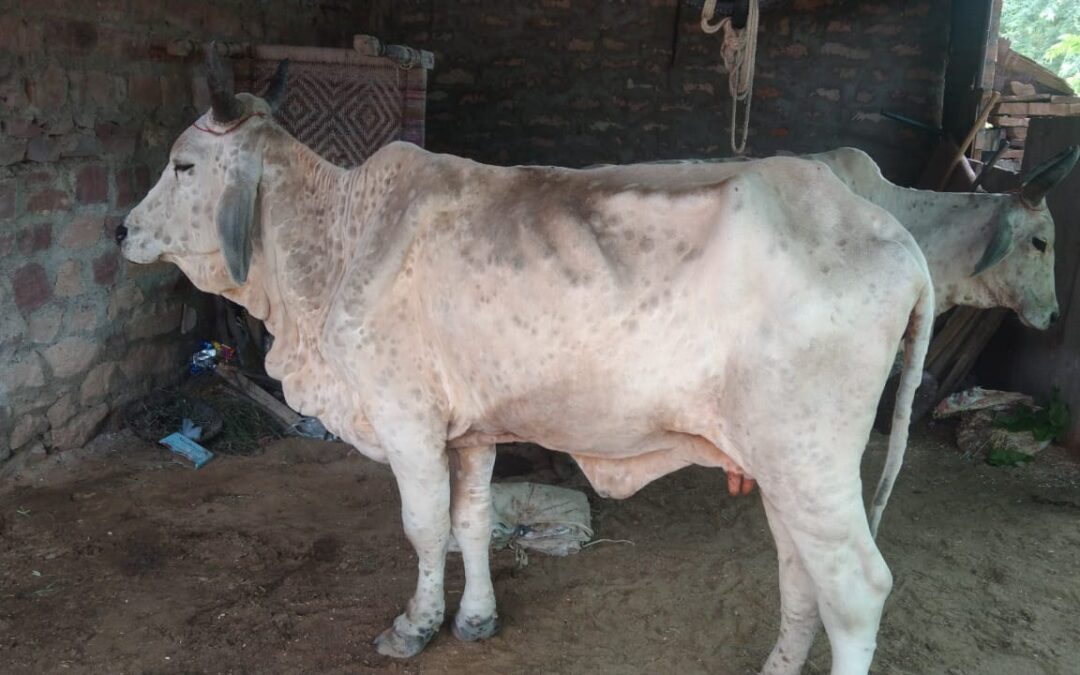 At present, nature has been causing a lot of threatening viruses to the animal kingdom, such as Ebola virus disease, Monkeypox, Marburg virus, and most recently, Lumpy skin disease virus in livestock and other lethal viruses.

We are discussing a more recent, eye-catching scene that made news headlines all over India. Lumpy skin disease (LSDV) is a vector-borne pox that belongs to the genus Capripoxvirus (CaPV), also called Neethling virus, and it is in the family of Poxviridae. The aetiology of LSD disease is highly contagious, and the aetiology signs of the disease are observed as lacrimation, hypersalivation, and multiple skin nodules with a diameter of 2-5 cm or 1-2 inches, persistent with a high fever of more than 40.5˚ C and an incubation period of 4-14 days. This condition worsens when attacked by secondary bacterial infection to cause pneumonia and, ultimately, it causes fatality in domestic cattle and buffalo. It is not considered zoonotic, so humans have no risk at all. Lumpy skin disease is a double-stranded covalently linked linear DNA and it is enveloped with a lipid bilayer virus that is very stable and found to have fewer genetic variances in nature.

Lumpy skin disease was first reported in Zambia in 1929 and LSD was further reported throughout the African continent during the year of 1950s and 1980s. LSD was first isolated in Kenya in 1958. More recently, it has scattered towards Asian countries such as northwest China, Vietnam, Thailand, Malaysia, Bangladesh, and India. In the present scenario, the Rajasthan government has reported that 10,04,943 animals are infected by lumpy skin disease in the state, killing 2,573 cattle. If we go to the national level, lumpy skin disease has collectively killed 35 thousand domestic animals in 9 Indian states such as Rajasthan, Gujarat, Punjab, Haryana, Himachal Pradesh, Uttarakhand, Jammu-Kashmir, Uttar Pradesh, and Madhya Pradesh, as per the Union Department of Animal Husbandry, and the data might vary from the present time of reporting.

The LSDV outbreak was reported during high temperatures, humidity, and the rainy season. The spreading mechanism of Lumpy Skin Disease is not fully understood. LSD is spread through arthropod family vectors such as mosquitoes, ticks, and other biting flies. In addition to direct contact with the lesion, infected blood, lacrimal secretions, semen, saliva, and nasal discharge

In fact, as prevention is better than cure, we need to adopt preventive techniques such as mass vaccination, containing attenuated viruses in it, which is the best known and available option to counter the disease. Infected animals should be kept in quarantine and separated from other livestock. Utmost hygiene and cleanliness surrounding the cattle house must be taken care of.  Mosquitos’ repellent or other arthropod-repellent techniques should be used to minimize the risk of vector transmission of the disease. Infected cattle and other livestock should neither be kept together nor graze communally in the field. Infected cattle with lesions must be given extra care to prevent any chance of secondary bacterial invasion. In such situations, they need antibiotic treatment and in the case of the absence of antibiotics in remote areas, livestock can be treated using naturopathy treatments such as a paste of some herbal medicines that can be applied externally to improve the antibiotic effect on the skin.

Cultivator Natural Product Private Limited is providing mass quantity herbal medicines all free, to the local farmers and the livestock holders to help them in controlling the disease. This act of Cultivators is boosting the faster recovery of the affected livestock and is also proving to be a blessing to the farmers to prevent the spread of the disease. The five days medicine course is given in the prescribed dosages as LFM-850 and Detox-1000 tablets for livestock, these medicines are working very significantly for early and faster recovery from LSD infection. Livestock holders should follow all the necessary instructions provided by their respective veterinary doctors as per the guidelines and good nursing care should be given to the infected livestock.

In these times of crisis Cultivator Phyto Lab provides consistent and accurate testing services for herbal medicine. Cultivator Phyto Lab has a complete AYUSH testing facility approved by the Department of AYUSH, Government of Rajasthan, and is committed to delivering the test results in a time-bound manner in compliance with regulatory requirements.