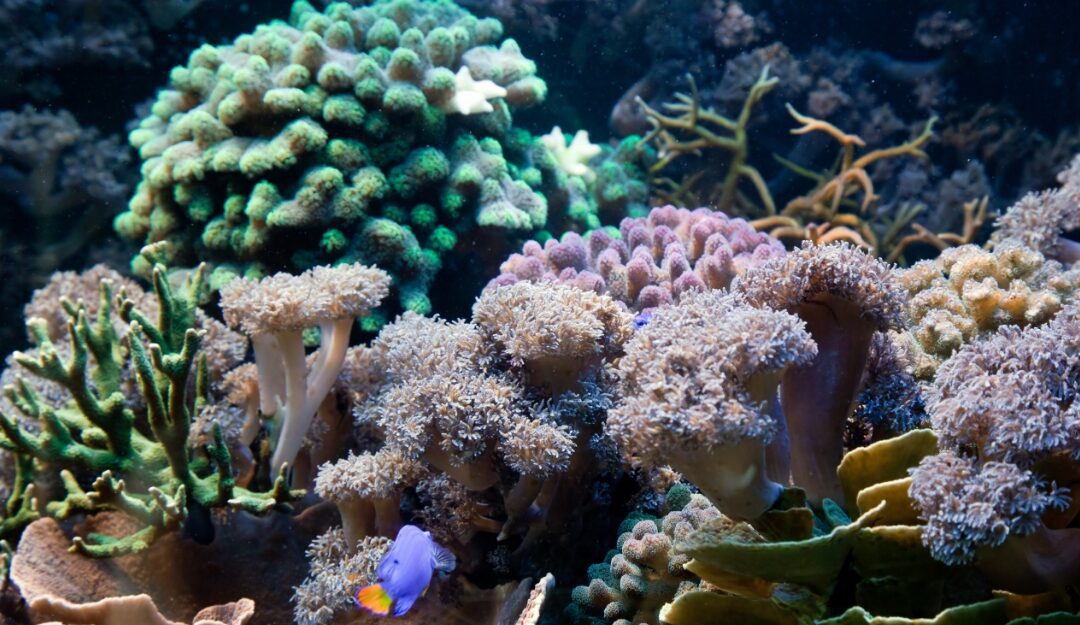 Coral reefs are the health indicator of ocean ecosystems which silently dying due to global warming. Corals are a group of hundred to millions of tiny animal creature called polyps, in which each polyp have a stomach with only one end opening called a mouth. The soft body of polyps produces a hard skeleton of limestone of calcium carbonate which attaches to the outer shell of live polyps or dead polyps, and it has growths, death, and rejuvenation of polyps to make the longer period of colonies life1.  Another important part is that it contains symbiotically association of microscopic plant-like structures called zooxanthellae to provide food by photosynthesis, thus coral flourishes, building up reef with the help of symbiotic relationship which makes us a clear communication that how much smartly collaboration in between coral and zooxanthellae which have made it largest structures of life form on earth. Perhaps it might be one of the oldest collaboration systems working for 25 million years under the ocean ecosystem2

The importance of corals and coral reefs may not be underestimated which have an ecological signature and are also economically beneficial to human beings. Ecologically, it provides shelters for several keystone species. Reef fishes, sea urchins, coralline algae, sea grass, and many other species of plant-like mangrove, seaweed, and animal make it a vibrant ecosystem that leads to one of the highest diversity index ecosystems in the world, it also holds the highest species richness in the marine ecosystem. Thus, the marine ecosystem has a great example of collateral and multilateral relationship among species which is serving with a great economic value to human beings. It is also providing a buffered zone and protected it from natural calamities such as tsunamis, cyclones, and coastal erosion. Economically vibrant opportunity to recreational resources for attraction of snorkeling, scuba diving, and underwater spelunking activities. Thus, the coral reef is the major hotspot for tourist attractions. However, corals and coral reefs are not limited to their utility for human being instead it is a good source of food and medicine. Coral reefs encourage several types of fish, seafood shellfish which provide a good source of micronutrients such as iron, zinc, calcium, magnesium, phosphorus, potassium, vitamin A, vitamin B12, and fatty acids. Coral reef considering the gold mine of modern therapeutic medicine for anticancer, antiviral, antibacterial, Alzheimer’s disease, heart disease, or other metabolite diseases. However, seafood is susceptible to contamination with heavy metals or microorganisms which need laboratory analysis before public consumption, in this regard Cultivator Phyto Lab is one of the best options to analyze your seafood products as per national and international regulatory bodies.

The major challenge for coral reefs is global warming which make bleaching and dies the entire ecosystem due to anthropogenic activity. The major cause of coral reef bleaching is the rising global temperature. Therefore, urgently need to meet all the norms as directed given in the UN Climate Change Conference in Glasgow (COP26).